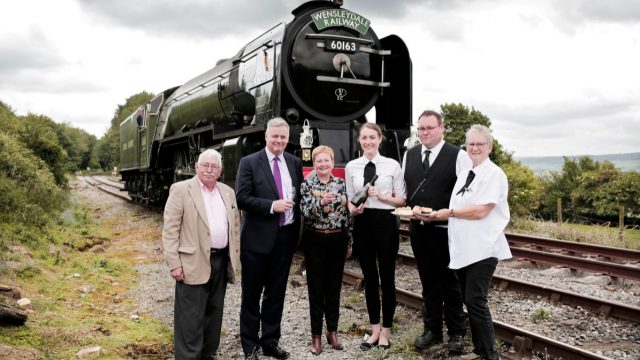 IT was full steam ahead as a housing association marked its 100th anniversary by celebrating its railway heritage.

Railway Housing Association treated 100 of its residents to an afternoon tea experience on board carriages pulled by the Tornado, a coal-fired steam locomotive built in Darlington and operated by Wensleydale Railway.

This was the signature event of the Association’s year-long centenary celebrations and it was made possible thanks to the generous support of Darlington Building Society.

The train followed the route of the popular tourist and heritage line starting in Leeming Bar and heading to Redmire, on the edge of the Yorkshire Dales National Park, before heading back to Leeming. On route passengers were served an afternoon tea consisting of sandwiches, cakes, scones and tea and coffee.

Among those travelling was resident John Baker, from Newcastle, who originally came up with the idea of doing something related to the railway for the signature event.

Mr Baker said: “It made sense to have an event connected with the railway and what better than taking people on an amazing heritage line like this; it was a fantastic afternoon.”

Another passenger was Margaret Turner, from Stockton, who like Railway Housing Association, celebrates her 100th birthday this year.

She said: “Seeing the steam coming off the train made my day; they don’t make them like that anymore!”

Railway Housing Association Chief Executive Anne Rowlands said: “The event was conceived for people like Mr Baker and Mrs Turner, and all our residents who are so supportive of what we do.

“It was a fitting way to mark our centenary, but it would not have been possible without the amazing generosity of Darlington Building Society.

“We are very grateful for their support and are pleased they were able to join us for such a memorable event.”

Darlington Building Society had their own carriage on the day and invited their members to join in the celebrations.

Chief Executive Andrew Craddock said: “Railway Housing Association has played a key part in the community for 100 years, and we were pleased to be able to help them celebrate their centenary in style.

“We were delighted to share such a special day with them, as well as bringing some of our loyal members along for the ride.”

Rebekah Jerram, Events Coordinator at Wensleydale Railway, said: “This is the first year that we have had Tornado operating on the line, so with Railway Housing Association’s history it made it even more special.”