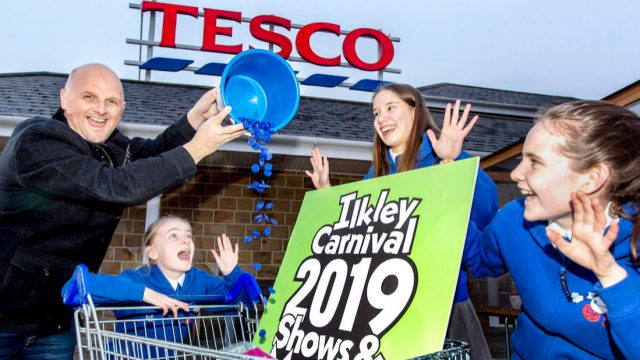 Ilkley Carnival is thrilled to announce it has bagged the top fund of £4k from Tesco’s Bags of Help initiative.

Throughout November and December, shoppers were encouraged to head to Tesco stores between Ilkley, Harrogate and Knaresborough to vote for one of three community projects using blue tokens collected at the checkout. Three groups – Ilkley Carnival, Wharfedale Festival of Performing Arts and United Response in Harrogate were all shortlisted and each now receives a cash donation from a minimum of £1,000 up to a maximum of £4,000.

Ilkley Carnival is a not-for-profit event which commences on the first May Day Bank Holiday of the year. It raises funds for the local community by donating the profits made through ticket sales, sponsorship, on-the-day donations and advertising. Created by the community for the community, over £84k has been raised since 2012.

Ilkley Carnival Chairman, Andrew Stacey, said: “We’re over the moon to have received so much support from local shoppers that we now qualify for the highest grant from Tesco! As the carnival is run entirely by volunteers and receives no extra funding, the Tesco donation will help to cover some of our one-off and capital costs such as marquees, traffic management training for volunteers and help towards our new website. This means even more funds will be available to donate to local good causes.”

He added: “We give 100% of the profits back into the community and last year we assisted our primary beneficiary, Burley Scout and Guide Group, to build a new hut as well as supporting around 25 additional local groups. The Ilkley Carnival committee would like to say a huge thank you to everyone who voted for our cause with their blue tokens – a vote for the carnival is a vote for our community – it’s an amazing start to our 2019 event and we’re looking forward to making a difference again this year!”

Ilkley Carnival invites people to the streets for the ‘shows and musicals’ themed day. The event kicks off with the all singing, all dancing parade which starts on The Grove and ends at East Holmes Field showground which hosts headline acts, classic cars, dog shows, trade and charity stalls and a plethora of kid’s activities.

Bags of help is run in partnership with environmental charity Groundwork, and sees grants awarded to thousands of local community projects each year. Since launching in 2015, it’s provided more than £67 million to over 21,000 projects across Britain.

Alec Brown, Tesco’s Head of Community, said: “Bags of Help contributes funds to community projects up and down the country and we’ve been overwhelmed by the response from customers voting in their local stores. We’re looking forward to seeing more projects brought to life.”

Groundwork’s National Chief Executive, Graham Duxbury, said: “Bags of Help continues to enable local communities up and down Britain to improve the local spaces and places that matter to them. The diversity of projects that are being funded shows that local communities have a passion to create something great in their area. We are pleased to be able to be a part of the journey and provide support and encouragement to help local communities thrive.”

Funding is available to community groups and charities looking to fund local projects that bring benefits to communities.