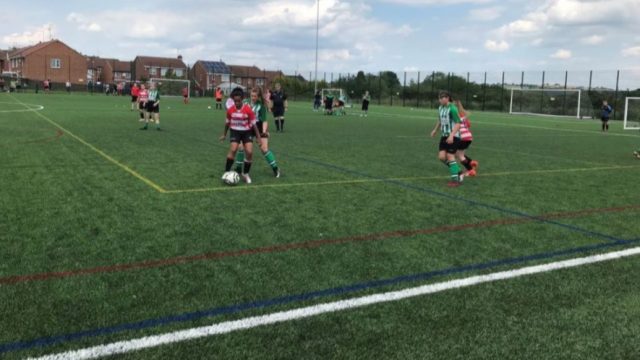 Despite the Women’s World Cup campaign coming to an unsuccessful end for the England team, another group of aspiring female footballers are set to make the nation proud as they take to the pitch to compete in the Coalfields Regeneration Trust Home International 2019 tournament.

Coming together to battle it out during a hotly contested knock-out, 123 girls split into 19 teams from 10 community clubs across former mining communities in East midlands and Yorkshire, battled it out for a prestigious place in the final.

As a result, both teams have earned a place to represent England at the Home Internationals Tournament in Manchester against clubs from Scotland and Wales.

During the Internationals, players between the ages of 14 and 16-years-old from the UK’s former mining communities will showcase their skills during the competition, which is just one element of the Trust’s award-winning sports programme that aims to improve the health, skills and self-esteem of young people from some of the most deprived places in the country.

Kat Clarke, Development Manager for Game On England, comments: “Football has an immeasurable ability to bring people of all ages and backgrounds together to share in a positive and fun experience, which couldn’t have been more evident in this summer’s amazing Women’s World Cup tournament.

“This is why we are so excited to be putting on this event, for the thirteenth year, to help young people from disadvantaged and deprived backgrounds come together and interact with one another whilst taking part in an inclusive, active and fun competition.

“Our priority is to improve and promote the health and wellbeing of these young people from former coalmining communities but also to support their ambitions. There is no better way to do that than playing football, and who knows, the next England woman’s football star could be amongst us!”