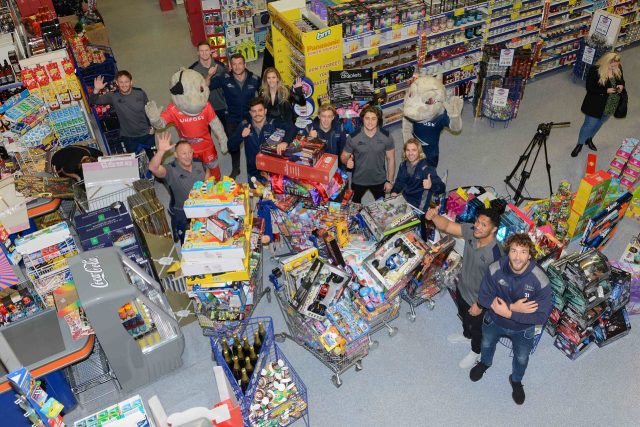 Players and staff from Premiership Rugby side Sale Sharks managed to bag £5,500-worth of toys and gifts as part of a festive trolley dash in support of the children’s charity, Cash for Kids.

They were joined by the club’s co-owner, Simon Orange and his wife Michelle, as well as director of rugby Steve Diamond and his wife Kate, with each team stacking their trolleys with as many items as possible in just three minutes.

After returning to the checkout to have their goods scanned and counted, it was club captain Jono Ross and utility back James O’Connor who came out on top, picking up a total of 277 items and £1,139-worth of gifts.

All the items collected – more than 1,100 in total – were purchased by the club and will be donated to Cash for Kids’ Mission Christmas campaign, helping to support the drive to make sure that disadvantaged children in Manchester have presents to open on Christmas morning.

“It’s been fantastic to have so many players and staff from the club involved today, supporting an amazing national project that’s having a positive impact here in Greater Manchester,” said Sale Sharks co-owner Simon Orange.

“It’s been good fun and we’re really pleased to be donating so many gifts and toys to young people through this year’s charity appeal.

“As a club, we firmly believe in giving back to our local community and we hope these gifts help to put a smile on the faces of hundreds of young people across the region this Christmas.”

Last year, the Mission Christmas appeal generated more than £17m in gifts and donations, which were distributed to more than 400,000 disadvantaged young people across the UK.

Michelle Orange added: “We’re really pleased to have played our part again this year in supporting the Mission Christmas campaign.

“The project is really focused on helping disadvantaged children living in poverty and at this time of year it’s even more important that local communities pull together in the true spirit of the season to support campaigns like this.

“By getting involved, we hope to raise more awareness of Mission Christmas and encourage people to donate whatever they can to support the charity this year.”

Anyone wishing to donate gifts to Cash for Kids’ Mission Christmas appeal this year can do so through designated community drop off points, with more than 300 drop offs across the country.