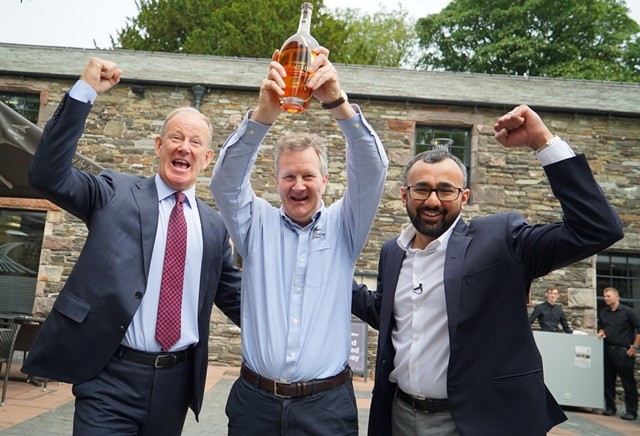 The Lakes Distillery auctioned 99 of its first bottles of single malt whisky, Genesis, with bottle number one selling for £7900. This surpassed the previous record of £7,100 for the first whisky to come from a new distillery, which was held by a Scottish distillery.

Genesis was sold at cask strength in a bespoke rosewood presentation box, each individually numbered and hand signed by Dhavall Gandhi, the Whiskymaker. Genesis comes from the Greek word meaning origin. The name pays homage to the distillery’s beginning, and gives a tantalising glimpse into its future.

The auction, which was hosted on www.whiskyauctioneer.com, started on 29th June and ran until noon on Tuesday 10th July.

Nigel Mills CBE, Chief Executive Officer of The Lakes Distillery, said: “Genesis signifies an important milestone in our history, because the first spirit we laid down is now more than three years old and we can finally call it whisky. The auction was fascinating and it exceeded all our expectations. We are proud to have not only produced a wonderful malt whisky but to have seen such a demand for the first bottles.”

Whiskymaker Dhavall Gandhi said: “We don’t just bottle our whisky because it is three years old; instead, I look at each cask to assess them individually until I find the right flavour profile. We have reached a peak for some casks and that is why we released a limited number.

“It’s an amazing feeling that people are finally recognising whisky as art. People have a lot of faith in what we are doing and it’s amazing to see the prices showing that faith.”

Paul Currie, Founder and Chief Operating Officer of The Lakes Distillery, said: “This is an historic moment and the success of the auction and the interest in Genesis demonstrates that the Lakes single malt whisky is a credible alternative to whiskies from the world’s established distilleries.”

Alan Rutherford OBE, Chairman of The Lakes Distillery, said: “Our expectations for the auction were high and we are thrilled that we were not disappointed. There was tremendous interest and this is reflected in the price and the records broken. I am very proud that 99 people will have the opportunity to taste this very special malt whisky.”

The whisky was first matured in Oloroso hogsheads giving it a vibrant character full of dried ginger and wood-spice. After the initial period of maturation, the whisky was finished in casks made-up of American and European oak to add a layer of dried fruit and vanilla. Finally, these two components were married together in Orange wine casks from the Andalucía region of Spain, giving it a spicy and chocolate-orange character.

The Lakes Distillery employs 85 people and is led by a team of four:

Paul Currie, Founder and Chief Operating Officer, as one part of the father-son team behind the Isle of Arran Distillers, Paul has whisky in his veins!

Nigel Mills CBE, Founder and Chief Executive Officer, was the driving force that saw the Mills convenience store brand grow from 11 newsagents to a chain of 77 convenience stores and eight supermarkets.

Dhavall Gandhi, Operations Director and Whiskymaker, joined the Distillery after fine-tuning his skills at Macallan and is instrumental in crafting the Lake District’s only single malt whisky.

Alan Rutherford OBE, Chairman, a leading figure in the whisky world, as testified by his OBE for services to the Scotch Whisky Industry and as the former production director at Diageo.

The distillery was founded with money from a group of North of England based investors. A further 2,435 investors supported the Distillery in a round of crowd funding on Crowdcube six months ago, raising £1.62million.

In addition, 2,975 whisky lovers joined an exclusive Founders Club, giving them the opportunity to enjoy a 70cl bottle of The Lakes spirit every year for 10 years.

The Lakes Distillery has won six awards for its visitor experience including the Global Masters Award for Distillery Visitor Facilities and Visitor Experience. It has also won awards for its spirits, tourism, its Bistro and the quality of its new buildings within the UNESCO World Heritage site of the Lake District National Park.