Home Appointments & Contracts Next generation of IT support and tech talent recruited by Leeds... 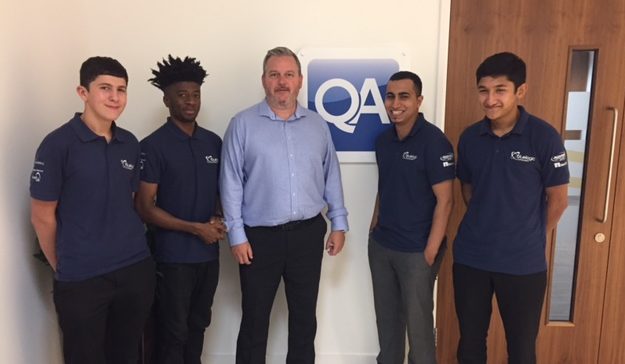 Four apprentices joined the company in August this year to begin Blue Logic’s apprenticeship programme. Hiring the apprentices is a further demonstration of Blue Logic’s commitment to developing strong local talent within the region.

Following an extensive induction process, the talented and focused young individuals will embark on a IT Systems and Networking Level 3 Trailblazer apprenticeship.

All the apprentices live locally and are aged between 17-18. They were selected following a full assessment day, after Blue Logic received more than 20 applications for the roles and interviewed more than 12 candidates.

Mark Ambler, Blue Logic’s Managing Director, said: “We’re delighted with the group of IT Apprentices we have brought into our business and our intention is that there will be an annual intake of apprentices.

“They all have a great attitude and a real desire to learn and develop. As well as learning new skills and gaining valuable qualifications, the apprentices will be moulded into the Blue Logic culture, working alongside and learning from more senior colleagues among our talented workforce in Leeds.’’

Simon Heafield, Head of Operations at Blue Logic, added: “During their training, the apprentices will be rotated around the business so to enable them to gain experience across all departments. I’m sure they have a great future ahead of them with us.”

Kathleen McLeary, Blue Logic’s Head of Human Resource, said: “All these talented young men have done incredibly well to secure their apprenticeships under intense competition. When we advertised the apprenticeships we set out looking for young people with the drive to succeed and we think we have achieved that.’’

The apprenticeships programme will run for 12 months, leading to the apprentices gaining formal Microsoft Technology Associate certifications in IT Systems and Networking. They then have the option of completing a further 12 months’ apprenticeship at level 4 or taking a full time role with Blue Logic.

Ali Al-Fadhli, 17, said: “I like being proactive and learning through practical exercises. An apprenticeship was the only route that could give me an environment like that and I’ve enjoyed my time at Blue Logic so far. I couldn’t imagine being anywhere else and I hope to stay with Blue Logic and see what the future holds.’’

Another enthusiastic apprentice, Daniel Hoult, 17, said: “I applied for the apprenticeship as after studying I believed it was the best course of action to develop my knowledge in computers. The other options, such as college and university, do not provide the hands on experience, qualifications or opportunities that an apprenticeship offers and not only is Blue Logic a really prestigious company to work for, the environment is a friendly one that is geared towards developing employee’s skills.’’

Mark Ambler added: “We’ve added people with strong skillsets to our already fantastic team. We’re constantly growing and getting on with the job. It’s the start of our next journey as a business and everybody is really excited and confident about the challenges ahead.”