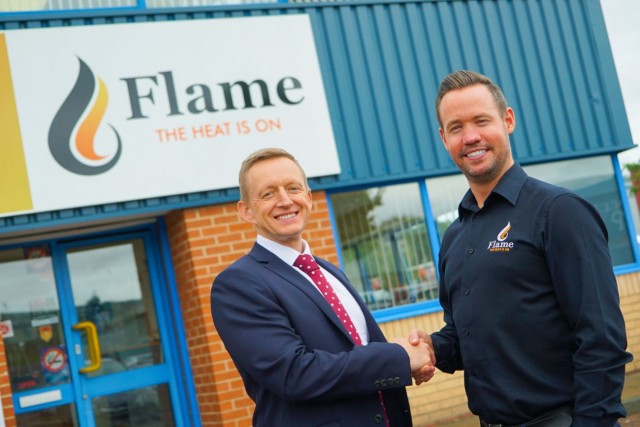 The Heating & Plumbing merchant is expecting to more than double its workforce with the creation of at least 60 new jobs after securing a £4m funding package from HSBC UK.

The deal will also see the Gateshead-headquartered company, which currently employs 59 staff, launch several branches in the North East and enter new regions over the next three years.

Established in 2011 with a single branch in Gateshead, Flame has grown to become the North East’s fastest-growing Heating & Plumbing merchant, which currently operates 11 trade counters across the region and in Scotland.

The company specialises in heating spares for commercial and domestic applications, renewable energy solutions and bathrooms, working with a number of leading, global manufacturers.

John Savage, Managing Director of Flame Heating Group, said: “We have enjoyed seven consecutive years of growth and are now in a position to drive forward our expansion plans. Our branch network has continued to thrive as a result of investments in our workforce, new services as well as emerging technologies, and this financing deal will strengthen the Flame brand further by allowing us to continue delivering on our ambitious strategies.

“Stuart and the wider HSBC UK Corporate Banking team understood our aims from the very beginning, and the collaborative expertise of all parties involved ensured a smooth process that will allow us to continue on our growth trajectory. Mark and his associates at Irving Ramsay were equally instrumental with their ongoing advice and guidance.”

John added: “It is an exciting period for Flame and we are looking forward to making our ambitions a reality, as a result of securing this finance deal.”

Gordon Forster, Area Director at HSBC UK, said: “John has a clear vision for his business and their exceptional service and focus on renewable energy solutions sets them apart. We place great importance on supporting local businesses, communities and economies. Flame has clear plans for expansion and we were thrilled to help support the next step in the business’s progression.”