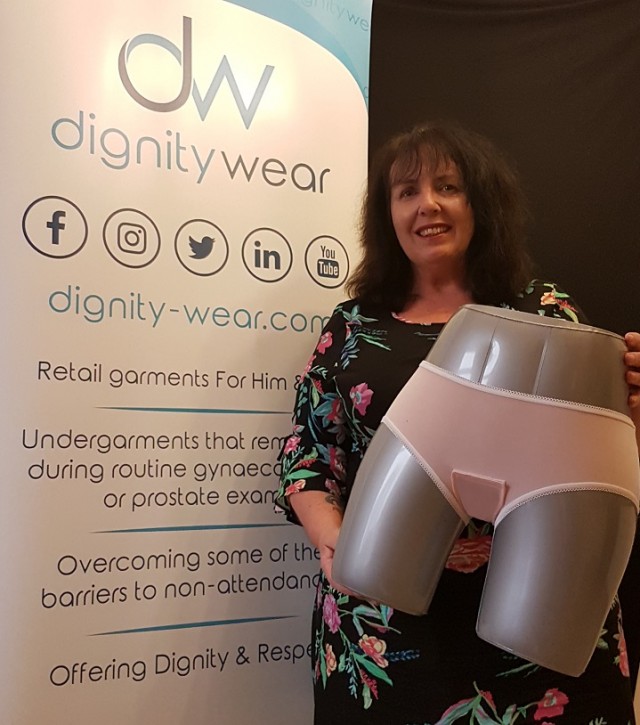 A Leeds-based businesswoman has developed a line of revolutionary products set to improve the falling cervical screening rate in the UK.

According to government statistics, more than one million women aged 25 – 64 years, did not attend their cervical screening test in 2016. Screening attendance has dramatically fallen over the last 10 years and is now at a 19-year low.

Founded in 2015 by former clinical Hypnotherapist Sally Benson, Dignity Wear was established with the aim of empowering patients and reducing feelings of vulnerability when attending intimate medical examinations.

Having carried out an independent survey of more than 200 women, Sally identified that 66% of women are more likely to attend a smear test if they have access to under garments which provide privacy during the examination.

“In recent years, cervical cancer has become the most common cancer among women under the age of 35. Most patients understand that going to a physician involves a physical examination that may require removal of some or all of their clothing and being undressed in front of a stranger. A rising number of patients are particularly uncomfortable with this and as a result are not attending their necessary medical screenings and check-ups.

“Following my own unpleasant experience at a smear test, I felt the real need to create something for patients that will protect their lack of dignity and increase levels of privacy.
“Each year, 3200 women are diagnosed as having cervical cancer at any stage. As well as the clear health benefit to patients, increasing the amount of smear test attendees will provide less strain on the NHS as the average cost per individual diagnosed with cervical cancer is £19,261.

“I am thrilled to be launching Dignity Wear products; it has been a long and exciting journey and it will be fantastic to see my vision come to life. If my products encourage even one woman to attend her examination to prevent this terrible disease, I will have succeeded.”

Dignity Wear also has plans to launch other products including a men’s range later this year. Milestone funding for Lancaster based next generation battery technology company